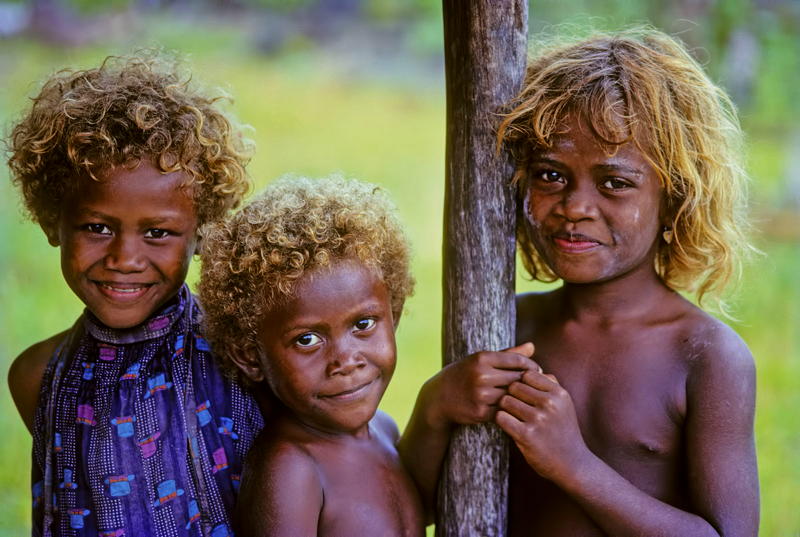 Many varieties of palm trees like this are the landscape in the Solomon Islands. This is an amazing place where you can find people very different from other people. It is interesting to note that while most people are dark-skinned, very often you can find blond or tall skin and curly blondes between children and adults. They have Scandinavian-like characteristics, and scientists still do not fully understand why this happens. The only thing that was possible to prove scientifically is that this genetic type of people has not been introduced to the island. It was formed within the country under the influence of unknown factors.

The main groups of the islands: Duff, Santa Cruz, Swallow, Bellon, and Rennell.

The traditions of the people

Long ago the life of the people worked according to the religious traditions and rites that were performed more than their ancestors. For example, a sacrifice to the gods that make the rain. According to the legend, the main gods were two brothers who founded the society of the Solomon Islands. In general, the pigs are used as gifts to the gods.

It is believed that the population of the Pacific islands took place in the West where there was a mythical land that then sank into the ocean. Now, most of the islanders’ life takes place in the ocean. This is their main wealth against the opinion that the Solomon Islands could be a source of incredible gold reserves.

Fishing is the main pastime and income of local residents. The surrounding area is good for fishing for marlin, hammerheads, and turtles. In addition, very popular here is enjoyed hunting monkeys. It is a source of proteins and vitamins. The vegetation cultivated in the Solomon Islands is taro, yam, coconut, and banana.

Some of the islands are so small that people spend all their time in the ocean, for example, a lonely island called Anuta (belongs to the Santa Cruz group). In about 400 square meters of land lives about 300 people – the density of the population is very high. That is why a part of the ocean around these islands is like a continuation of the field in the possession of the people of Anuta.

Other islands are so low that very high ocean tides sometimes flood the island and even the houses and entire streets where people live.

The Solomon Islands were for a long time the birthplace of Pacific cannibals. It is the largest concentration of descendants of cannibals although at the moment there is no cannibalism on the islands.

The Solomon Islands have been a haven for pirates for a long time. Now the Islanders are not as wild as they used to be. The islands are also a strong military fund. The Japanese army landed on Guadalcanal on July 4, 1942, in order to organize a military base there. On August 7 of the same year, the Americans landed to conquer the Solomon Islands to become masters of the Pacific Ocean.

Almost at the same time, the island knows the strong Spanish influence. That’s why one of them is called Santa Isabel. The foreigners were attracted by the stories of the Incas of the mysterious golden land in the Pacific Ocean. The Spaniards were surprised that the savannas and deserts of the islands were densely populated. Alvaro Mendaña de Neira was widely considered as one of the pioneers of the Solomon Islands that is why people first knew the name of the Mendaña inhabitants. Alvaro called the islands in honor of King Solomon since it was considered that there is gold compared to the wealth of the ancient king.