Breaking through Himalayas – What to expect in Nepal 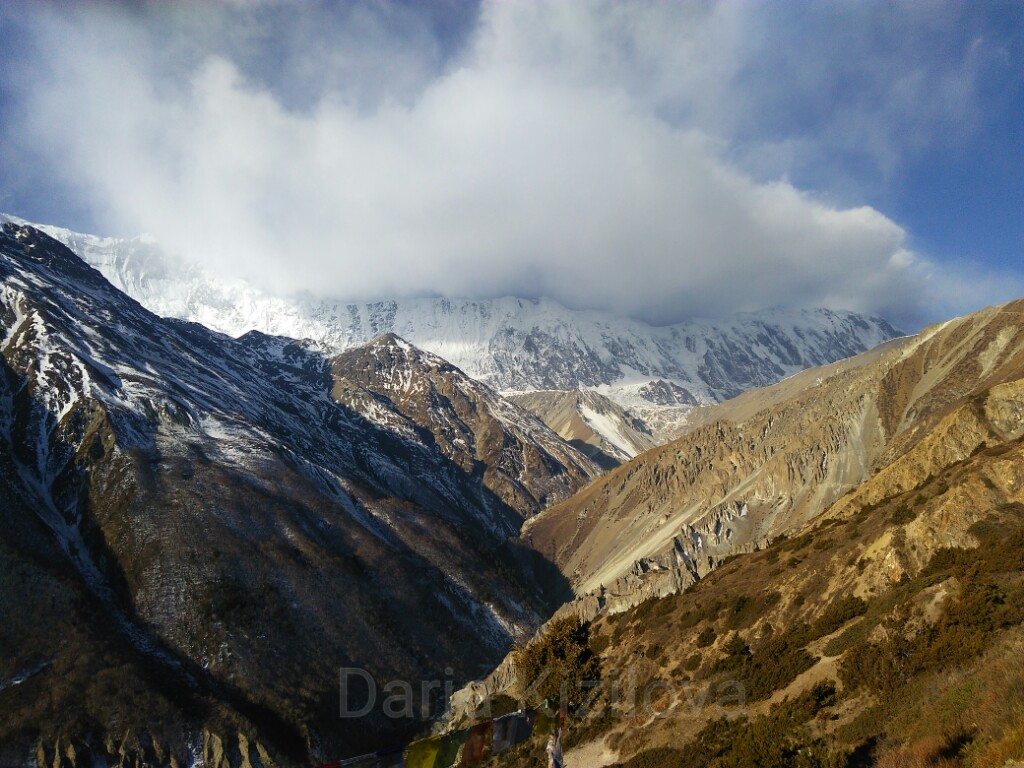 Imagine a valley with steep mountains, rugged threads of trodden roads and colored wooden houses planted over cliffs. All this is covered with light gray smog and dust in the air. This is the central part of Nepal. Sometimes on the roads, you can meet herds of cows and yaks. The higher into the mountains, the cleaner the air, and snow peaks can already be seen. It is said that nowhere in the world there are no more such steep, deep and rugged valleys as in the Himalayas. For example, the Latin American Andes are more smooth, gentle mountains with beautiful sloping valleys. And on some mountain roads in Nepal, it’s scary to look down the cliff because there’s no end in sight. It’s hard to imagine how people drive cars along these roads and they don’t catch their breath at every turn. These are serpentine roads covered with broken boulders of rocks. Sometimes the roads are flooded with a waterfall breaking from the mountains, and if it rains, the road turns into a thick mess of stones, people and rock.

Visa and flight to Nepal

I flew to Kathmandu from Kuala Lumpur which is very practical. In general, you can find cheap tickets from Malaysia almost anywhere in the world. Kathmandu is located in the mountains at an altitude of 1400 m. Because of the haze, smog and bad weather, landing is not always safe. At the end of the flight, the pilot said: “Thank God that we sat down, we were very lucky.” It is very inspiring …

At Kathmandu airport, there is always turmoil, and in general, it is not as convenient and comfortable as in other cities of the world. Coming out of the plane, you need to immediately take a queue for a visa. The procedure is simple: you pay $ 40 (a visa for a month) – and you get a small sticker on your passport.

After that, you need to check whether your bag came. From Malaysia to Kathmandu, the Nepalese carry a lot of things – televisions, refrigerators and all sorts of different appliances. There you can buy it cheaply. Therefore, after about an hour and a half of waiting, you finally get your luggage.

To get to the city, it is best to agree in advance with the hotel where you are going to stay. I did not fully understand how to tack on the streets of Nepal without help.

The Nepalese are very talkative and friendly people. They are always ready to help and very polite. Of course, most of their motives are based on profit but their friendliness is so catchy. The higher up the mountains, the more ordinary people are. Here they are ready to help just like that, to share their culture and kindness, they are also interested to learn a little about the life of a stranger. The very courteous and polite Nepalese people contrasted with their Chinese neighbors. The rhythm of life in Nepal

To get used to the situation in this country, you need to be lively and active. The capital of Kathmandu is very different from tourist cities like Pokhara, and even more different from distant cities on the border with India (for example, Bheemdatta). If you are in the street in the capital, you immediately fall into the stream of people in masks and ringing sirens of cars. They have such musical signals approximately every two minutes of the journey. You can cross the road anywhere, there are no crossings. Asphalt roads are also rare, and there are a lot of tourists in beautiful places. For example, in the largest Buddhist temple Boudhanath. It takes 9-10 hours to get from Kathmandu to Pokhara, although the distance between them is only 150 km. The road is winding and uneven, buses sometimes bring in. First, I had a plan to get to Bhimdatta – 700 km, but after a 9-hour trip in the Nepali bus, this idea changed. I got the impression that tourists in Nepal are not very fond of tourists and respect them less than their own local ones. On the islands of the Pacific, it is totally the opposite. There, tourists are gods. Of course, this is too much but not as severe as in Nepal.

Pokhara has a more measured rhythm of life but it is very touristy. Phewa Lake where it is located gives it a little calm and allows you to hide from people. From here begin popular tracks on the nearby mountains, the most popular is Annapurna. There are some interesting things around Pokhara, for example, Mount Sarangkot (for warming up before long tracks), caves, Tal Barahi temple in the middle of the lake, Buddhist temple Pagoda, and Begnas lake (a little further from the city but highly recommended). Before any trip to the mountains of Nepal, you need to make paid passes. The higher – the more passes you need. This can be done in any travel agency on the streets of Pokhara. There are several tracks in the Annapurna area. The easiest and the shortest one that can be done without a guide is Poon Hill (only 3 days, height 3210 m). This is the beginning of a longer hike to Annapurna Base Camp which rises to a height of 4130 m. I went around Annapurna because I wanted to look at the highest lake in the world, Tilicho (4.919 m) and returned the same way, that is, I did not complete the ring of the track due to limited time. In fact, the hike is the longest possible walk in the area, it takes about 20 days. You can speed up or drive apart in a jeep. This is an unforgettable and dangerous entertainment. One friend, who rode so to a height of 3500 m and immediately back, could not walk the next day. The journey around Annapurna begins from the city of Besisahar which lies between Pokhara and Kathmandu. This point is at an altitude of about 760 m above sea level, not a remarkable town. Then the road goes up the serpentine on the slopes of the gorge and passes through the cities of Siange, Chame, Pisang and finally Manang at an altitude of 3500 m.

In fact, on the map, it is a pedestrian road but jeeps with locals and tourists jump very cheerfully. Usually, everyone goes on the ascent and only a few on the descent (because everyone takes another road back, around Annapurna). Jeep arrives up in 9 hours. This is not an easy journey – the car travels very slowly but jumps half a meter above the road every few seconds. You need to hold tight, sometimes there is no space inside the jeep – and you have to go in the back, standing for cushioning when jumping. Manang is a rather large mountain town. There are many temples decorated with colorful flags, like everywhere else in Nepal. On the roads there are yaks. Near the town, there are two lakes. The air is very dry, and the height is felt from the cold. Therefore, here you need to spend the day for acclimatization. The ascent to Lake Tilicho can be completed in a day and a half. This is a quick jump to an altitude of almost 5,000 m. The road is quite dangerous since it is not even. Sometimes it is just the sloping slopes of rock, among which a mini-path is trodden. One wrong step – and you can roll down the slope. The road passes through the crevices between the rocks and the high suspension bridges over the turbulent mountain rivers. On the way, there is one “hotel” and a mini-city. At an altitude of 4200 m where you can already see the snow, the base camp of Lake Tilicho is located. From here it remains just a short time to the lake itself. But to overcome such a segment of height in one day is dangerous – it is recommended to increase by no more than 700 m per day if the overnight stay is at this height.

The camp is warm, there is always a lot of people. Interestingly, in mountain hikes overnight stay in these camps and hotels is usually free, if you order breakfast, lunch, and dinner in the same place. Sometimes you need to pay $ 2 per night. At this altitude, it is already very cold at night, so everyone has 2-3 warm blankets (they don’t heat the rooms). Altitude and cold provoke the onset of mountain sickness but the main thing is to be active. The more activity – the faster the acclimatization. The path to Lake Tilicho is quite simple but it goes all the time, meandering up. Near the lake in February, the snow is still not melting and very windy but it itself is frozen. The temperature is about -20. To swim in the lake, it is better to come in October-November when it is much warmer.

How much are food and accommodation

Traveling in Nepal, this is not worth much thought. Staying overnight in cities costs an average of $ 5. Sometimes this price even includes a mini breakfast. Overnight in the mountains is either free or 2-3 dollars. Higher up, the water is expensive but you can drink from springs and rivers. Food, too, gradually becomes more expensive. Many people order dhal bhat – rice, pea soup, curry, greens. The advantage of this dish is that the portion can be updated indefinitely. 🙂