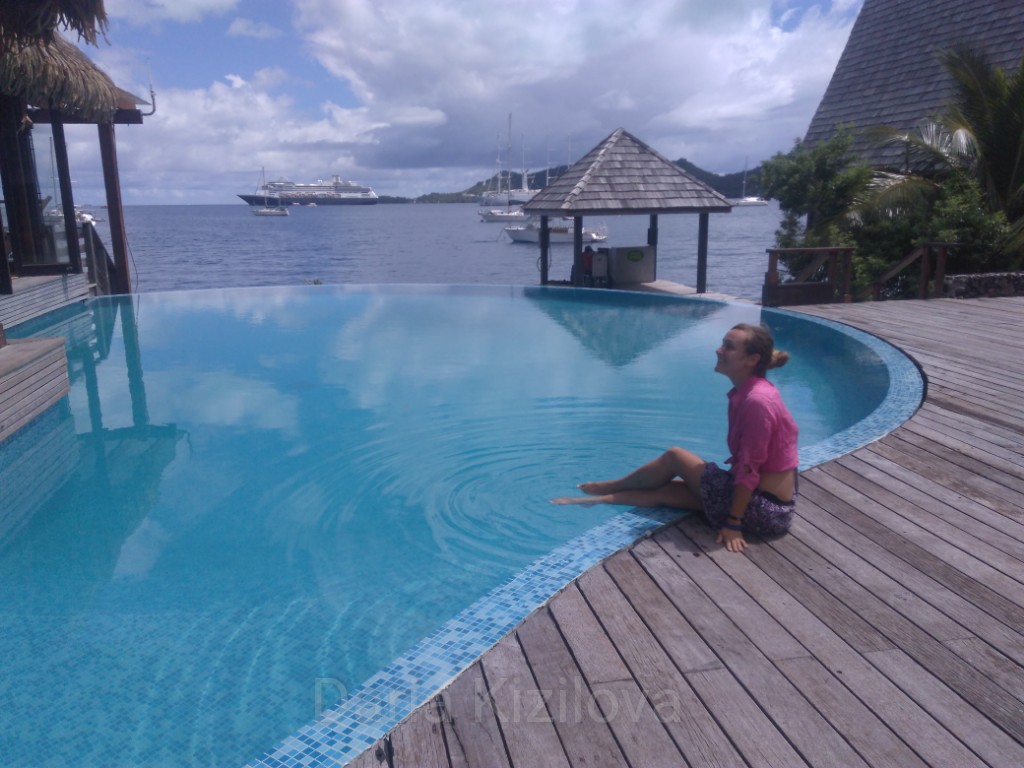 French Polynesia is a place where you must try to go at least once in a lifetime! This endless underwater with fish, corals, turtles, whales. You can even live underwater! It means, everyday diving and snorkeling several times a day, especially if you are close to the beach with good corals.

On Tahiti (the main island of Polynesia with the capital of Papeete), it will be more difficult to do because it takes time to get to beaches. They are taken by resorts. Otherwise, you can camp in the wild east of Tahiti (Presqu ‘ île).

Tahiti is better known for its waves. For example, each year there’s a Championship at Teahupo’o, where great surfers come from Hawaii, Easter Island, and other locations.

In an hour of flight or several hours of the sea from Tahiti, you will find the island of Bora Bora. This is where you can really live near the beach and swim with fish all day long. The island itself is so small that you can drive around in 20 minutes. How do people live there circling every day along the same old road? It’s hard to imagine and even harder to understand. As for me, it would be much more interesting to live under the waters of Bora Bora. Bora Bora is almost full of French people who came from the mainland – France – and settled in this fish paradise. Many of them have their own boats, and indeed they live very well there. Large spacious houses decorated with sea trophies. Everything is elegant with a slight Polynesian touch.

The island has just one large supermarket, where a small variety of products from France can be found. There are also a few small shops. Prices are twice bigger than French prices.

How to get to Bora Bora

Air Tahiti flies to the island of Bora Bora 8 times almost every day! The flight lasts from 50 minutes to one and a half hours and costs about $200 one way.

Hawaiki Nui is a ferry departing twice a week from Tahiti to Bora Bora. The journey lasts several hours, along the way he stops on other islands. Where to live on Bora Bora

The island has several luxury hotels, for example, the InterContinental Le Moana. It is located on the southern tip of the island and has its private beach. Although there’s another public beach on the island — Matira Beach. There are no hostels on Bora Bora. There are only hotels and guesthouses. Prices start at about $ 100 per night. In place, you can find more affordable housing. Since there are a lot of French on the island, most of them have registered in the Couchsurfing system. Therefore, it is not so hard to find where to stay.

I stayed in a very nice place with a cool French guy! The place where I stayed was just on the beach in a small house. From here it was convenient to go swimming with fish and turtles in the morning.

Matira beach does not have the richest underwater world unless you go really far away. The fact is that this place goes to the open sea. The other sides of the island are in a lagoon, so there are enough underwater creatures there, especially if you sail away to the miniature islands of the lagoon. Things to Do on Bora Bora

The best occupation you can have on Bora Bora should be connected to the sea and tourism. On the island itself, there are few hiking places to see, so all the attention goes to the lagoon, nearby islands, sailing, swimming with whales, etc. Many tourists do not even come to the main island, but remain in hotels on the islands along the lagoon. From land-based entertainment on Bora Bora, you only have bars and spa hotels. The nature of Bora Bora

The island is located in a vast lagoon. There is a network of islands around, one of them is where the airport is located. From West to East the islands are:

The last two are the most incredible islands with several major hotels with huts placed right on the water.

In the center of the main Bora Bora, there are several low mountains. Most of them do not have tourist routes because they are not popular. Mostly, there are local tracks that sometimes run into someone’s estate or private ownership with dogs.

The main mountains are:

In the south, the island is so narrow that from east to west you can cross on foot in 15 minutes.

In the north of the island, on the hills of the Fa’anui, the remaining guns stand since the end of the war. Mountain path leads there, and within an hour you can look at the lagoon from above. In fact, there is no other place like that to see the whole island of Bora Bora from the top. Bora Bora has a tropical climate with an average temperature of +27. At the same time, the water temperature fluctuates within + 26. Almost every day the island has magnificent sunny weather. However, it is sometimes quite hot and the sun is very active. A refreshing ocean breeze lets you weather the midday heat.

Bora Bora has two seasons – dry and wet. From March to November, a dry and less hot type of climate prevails. There are practically no precipitations at this time. The wet season lasts from December to February. Light rains sometimes pass at this time. When the sky is covered with clouds, the Bora Bora lagoon becomes even more emerald-beautiful. The tropical plants of the island bloom are even more active during the wet season. The island glows with colors and life.

The most famous event that takes place annually in Bora Bora in October / November is the Hawaiki Nui canoe race. The competition is attended by the strongest clubs of Polynesia, there is a separate competition for the women’s team.

The race starts from Huahine Island. The participants then sail through Raiatea and Taha’a islands spending the night on each island. This is a three-day race. Winners are greeted in the bay of Bora-Bora. Locals who have their boats, swim in the open sea to be the first to meet and take pictures of athletes. In general, it would probably be difficult to live on Bora Bora, if not in the company of best friends and with your own boat. In about a day, you can go around the island in a circle, and the next day – go the opposite way.

For example, you can find a job in a luxury hotel or grow coral reefs. But without the possibility of moving beyond its limits, on such a small island, any work will become routine.

It is best to come for a few months or live alternately on different islands of French Polynesia – for example, on Moorea or on the Marquesas Islands.