10 tours to travel the whole Easter island in 3 days 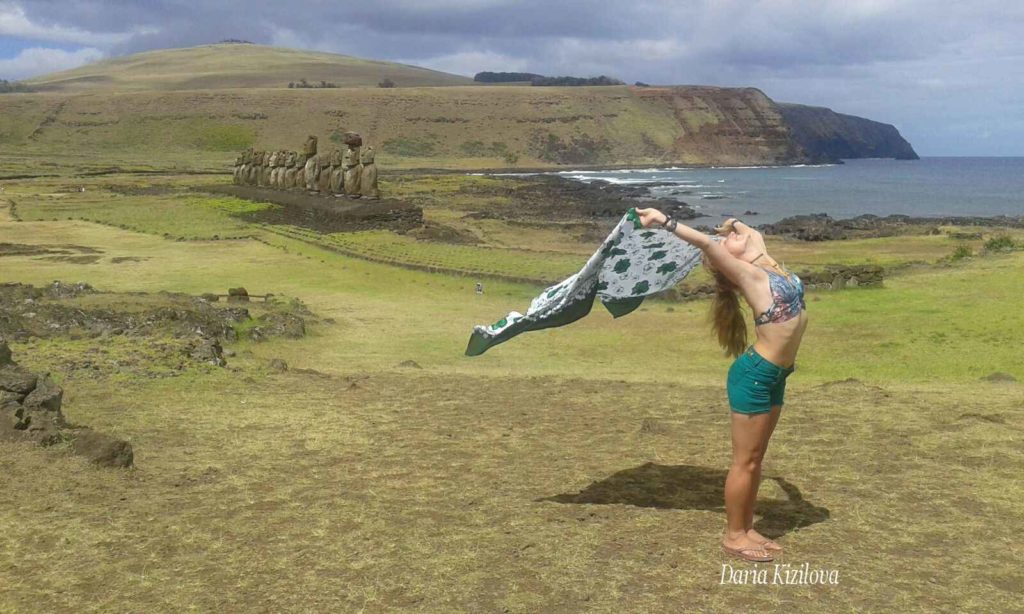 The surface of Easter Island is 165 square km but there are so many interesting and beautiful places that you can always find some roads that are still unknown. For example, I was there for four months and I still find new places: a hidden path that I had not noticed before or the view of the island that was first introduced. For example, one rainy day I went through the forest in the center of the island, and this place looked new. Not only did the light and landscape change, but it also seemed an illusion. But the feeling of something new is so nice!

Easter Island has a triangular shape. It is a triangle whose vertex faces the northwest and the lateral corners, – to the south (in the direction of Antarctica) and east (to the continent, Chile). The capital of the island of Hanga Roa is located in the southern corner. On the corner is the crater of the volcano Poike. And on the north side, you can see the beautiful and almost the only one on the island – Anakena beach. Locals are not considered part of Chile. Most of them do not like Chileans and would like to declare their independence. Or, just like the island of Tahiti, it becomes a remote part of the country, but not its part. When someone travels here in Chile, they say, “go to the continent” or “go to the conti”. However, becoming independent is difficult because the island is small, far away in the ocean and too dependent on Chile in terms of food, alcohol, building materials and so on. In another article, you can learn a lot more about Easter Island.

The southern part of the island is where the entire population is concentrated. The whole southeast base of the triangle is a steep rocky coastline where there are no houses. There are only one road and bays some of which have ancient statues (moai). The north-western part of the triangle – it is also rocky. However, there are a smaller number of statues (only Tahai). Here the caves are concentrated on Easter Island where the Islanders once lived and hid.

The upper part of the triangle (north) – is a desert place that is located behind the Maunga Terevaka mountain. There is no pedestrian path, lots of stones and thorns. You can find horses and cows alone. But I was here 🙂

In the center of the island (on the side before the Maunga Terevaka mountain), there are cypress forests. There is relatively little wood on the island. Some palm trees grow in the city and on Anakena beach. There are solitary trees in the southern and eastern parts of the island. However, a large area is a field of dry grass-covered with shrubs. Easter Island is a volcanic island (the island in the Pacific Ocean can be coral – new and low, or volcanic – ancient and high). That is why there are several volcanic craters: Poike, Rano Raraku, Rano Kau, Rano Aroi – Rano is a crater. Anakena is a favorite tourist destination. It is a beautiful quiet bay, surrounded by palm trees with white sand, crystal clear water and stone statues on the shore. From the capital of the beach of Anakena that is from south to north through the island runs the track of 17km which is 15-20 minutes by car from one end of the island to the other.

Near the beach of Anakena, there is another smaller one – Ovahe. It used to be bigger than it is now but the tsunami flooded most of the beach. Behind it continues the steep rocky coast to the Poike volcano in the east. From volcano to Hanga Roa you can go back by the road at the base of the triangle by car in about 20-25 minutes (19km).

This more interesting path can be made by stopping on the way back to the Ahu Tongariki (platform with 15 stone statues at the base of Poike) and Rano Raraku (factory of the production of stone statues near one of the main craters of the island). On the way to the capital, you can find some interesting archaeological sites with statues and ruins but more about it in a separate article about the moai of Easter Island.

You can travel the island by car very fast in 1 day, that’s why I’m going to create routes for bicycles or pedestrians. Route 1,2 – it’s actually a circular route around the island. It will take approximately 1.5 hours to get to Anakena, to rest there 2 hours. Up to Tongariki, there are 6-7 more km or a half hour. In Rano Raraku you will need at least a couple of hours. From there to reach the capital you will go by bicycle in 1.5-2 hours without stopping. If you make stops – it will take up to 3-4 hours.

In general, you have to go quickly without stopping. This route is for those who have little time on the island. From the airport of Mataveri to Ahu Vinapu (a place where there are two statues of Vinapu 1 and 2 built around 1200 AD., so the burial room is hidden at the base of the statues) can be reached in a few minutes. Then, on the southeast road, you reach the moai factory and the Rano Raraku volcano. After driving further to the Poike, from visiting Anakena (possible along with a second small beach Ovahe) you can go straight to the capital of the island. This bicycle route can take around 8-10 hours. In fact, it looks like Route 2 but the other way around.

This route starts from the Rano Kau volcano (15-20 minutes on foot from the airport). You can go immediately through Vinapu, then along the road to the north but do not go to the Anakena. Just get to Ahu Akivi (the only platform where the statues look out to sea, and not inside the island). One can go through the manufacturing factory of the Puna Pau moai hats that were made separately from the fundamental statutes (from Rano Raraku). From there you can go along the western coast of the rocky caves and return to Tahai. This route is short and can take 4-5 hours by bicycle. This route is similar to the previous one, only in the opposite direction. From the capital, it goes to Tahai. Following the caves, you can reach Ahu Akivi in a couple of hours. From there if there is a time you can climb the Maunga Terevaka mountain with views of the whole island. Then, return to the city on the road passing through Puna Pau.

I made this route when I arrived on the island for the first time. Half of the day was taken (first walking, then by car). It is difficult to ride a bicycle. We have to go up to Maunga Terevaka and go down to the other side. On the backside of the mountain, get to Anakena, passing through Ahu Vai Mata. This road is not well known, and there is nobody there. There are only a couple of houses and horses.

This route looks like the previous one, only in the opposite direction. It all starts with getting to Anakena, and then by the route behind the mountain you have to climb it (it’s more difficult because there is a prominent road). Then go down to Ahu Akivi, and return to the city.

From Hanga Roa Tahai the road continues through the caves. However, instead of diverting for Ahu Akivi you have to continue along the back of the Terevaka mountain where there are no people, no roads. It is a rocky and very long itinerary that can take 6-8 hours or more since you have to go to the northeast corner of the island to Anakena by the rocks. From Anakena you can take a car to the town. It is the previous route but in the opposite direction. It is better to prepare and take a car to Anakena. Then follow a long road through the abandoned places and Tahai caves, and return to the city.

The route seems simple but it is not. Tourists usually do not visit the Poike volcano because there are no platforms with statues, there are caves only. However, there is nature and vegetation, and it is worth going there. You can climb it on foot for 4-6 hours. Or by horse – for 2-3 hours. First, we reach Poike on the southeast road. After knowing the volcano, you can go up and relax on Anakena beach and then return to the city.

All routes around the island are marked on the map at the beginning of this article.