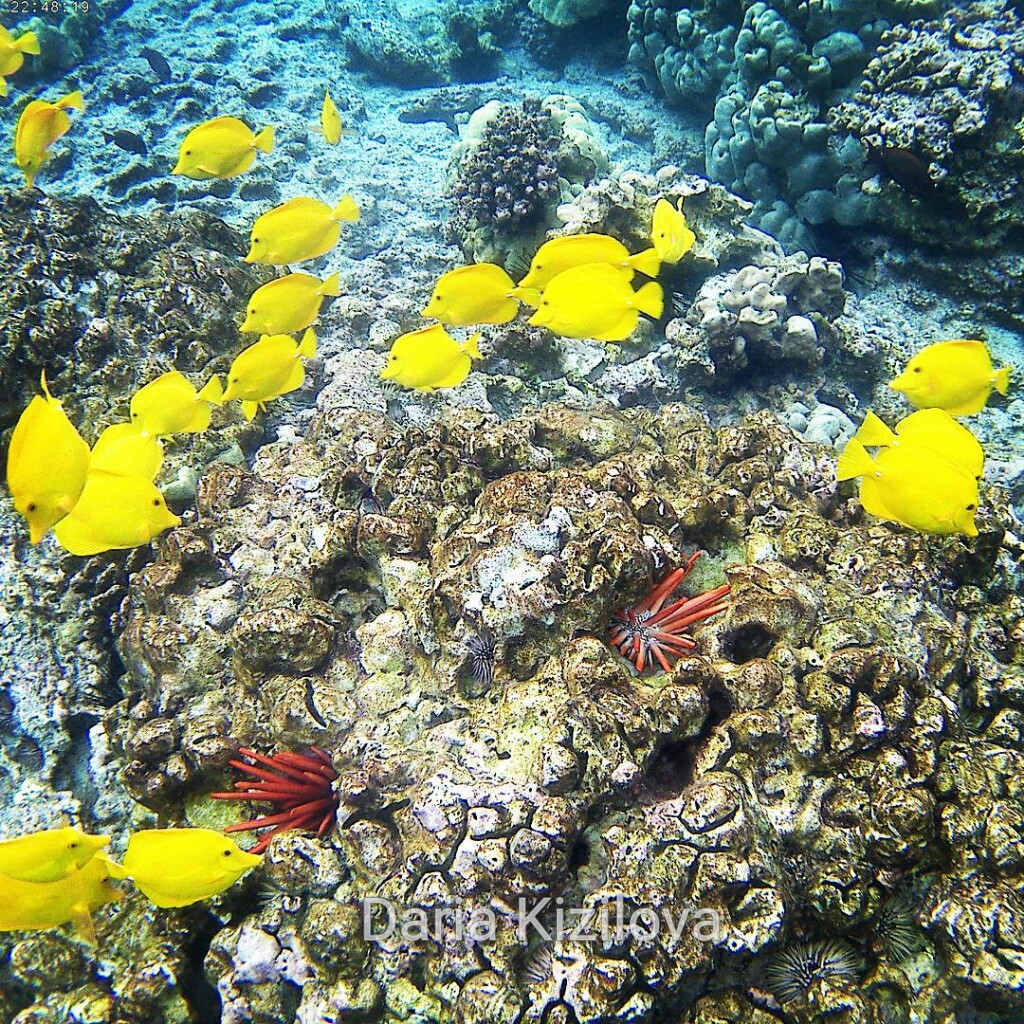 If you look for a place on Earth that contains all the natural wonders and climatic zones and is surrounded by water and lost in the ocean, it will be the island of Hawaii (Big Island) – the largest one among Hawaiian islands with the active volcano of Kilauea, spewing fire into the ocean depths.

This is a kind of powder keg. It’s hard to imagine how people live there. It happens that lava covers entire villages.

Here is also the highest peak in the world ~ 10 211 m (if you count the underwater part of about 6000 m) – Mauna Kea. In addition, on the Big Island is the most colorful underwater fauna in the bay of Captain Cook (Kealakekua). It was on the Big Island that he was killed and cut by Polynesians. How to get to Big Island

There are several direct flights to the Big Island, for example, from Seattle, Los Angeles, Phoenix, San Diego, Denver and Tokyo (Japan Airlines).

However, the easiest way is to fly from the state of Hawaii, Honolulu, on the island of Oahu.

In fact, Hawaii includes 8 islands, of which I was the four main ones:

It is difficult to choose the most interesting island because everyone is attracted to different things. Personally, I am inspired by the diversity, so the Big Island is the coolest: Trip to the volcano

The most interesting thing is that I even happened to visit the volcano three times. I will tell about all three events!

The first time it happened in 2016 during a world tour. At that time, the crater Puu Oo was actively splashing lava that was falling directly into the ocean near the settlement of Kalapana. Then, in mid-2017, it stopped. And now Kilauea is awake again with even more energy!

Kilauea is located in the southeastern part of the Big Island on the territory of the National Park of Volcanoes. To get to the crater Puu Oo that is actually the most active, you can take the two opposite sides:

When a volcano threw lava into the ocean in 2016, only the second path was possible. The road from the other hand, was too dangerous because lava flows are not predictable. From Hilo (the main city of the east coast – Hamakua Coast) to Kalapana, it is about 1 hour by car, through the cities of Keaau and Pahoa.

Then the journey continues to frozen lava (but this is still a clear road) on foot from the checkpoint to the lava flowing into the ocean. This is about 2-2.5 hours on foot or about an hour of cycling. Bicycles can be rented directly at the checkpoint for a fee (from $ 10 / hour).

At the end of the path, there was a great view of the raging flow of lava in the ocean. True, they did not let me get closer warning that “this will be the last photo in your life.” At the end of 2017, the lava stopped flowing into the ocean. However, there was a new entertainment! Now the flow of lava has become even more unpredictable, and literally, every day changed the direction. In places where burning lava flowed and gradually hardened, small “lakes” were formed – such heat-breathing boilers.

The hunt for lava began! Now hiking to the Volcanoes Park took place only at night (since lava is easier to spot). And they did not always end with a find. Sometimes it was wasted 2-4 hours of searching, at night on foot along the frozen lava (now not along the beaten track, but literally on the fossilized waves of lava). I wonder how the Americans allowed such dangerous entertainment because they like security in everything. Probably could not decide to stop the cash flow from tourists.

So, the second time in Hawaii, of course, I’d love to see and touch the lava! Especially when nobody controlled it. Lakes could be anywhere. At night, there was nobody in the park.

But this is a completely official legal journey, so many went to look at the lava.

The first attempt to find the lake ended in failure. We used the first approach to the lava, namely from the gate of the park. It took 30 km from the entrance to the park to the end of the roadway – parking. From here only on foot (no one gave bicycles) for about 2-2.5 hours until the end of the pedestrian road. It is better to start the way early, so that (as it starts to get dark) you can be at the end of the road and begin to look out the lights of lava. Lava may not be very far from the road and maybe inaccessible. Anyway, it is difficult to calculate when it is dark

Having approximately determined the position of the “lake”, we walked another 2 hours from the road deep into the frozen lava waves. For orientation on the lava field, a rope is stretched, and there are identification pillars that are visible in the dark. This rope fences off a dangerous area (where the volcano is most active), and also helps not to get lost on the lava.

During the entire journey along with the lava, one should not get carried away and forget that there is the same journey back 🙂

Unfortunately, for the first time, it started to get really windy. It was quite difficult to move, besides on the lava because of its heterogeneity, you need not just go but jump. In general, I had to turn back without meeting face to face with lava.

The second trip to the “lake” was more successful. This time, we approached from the side of Kalapana (option number 2). This is the most successful option. First, not so far to drive a car (1 hour from Hilo). In addition, from the parking lot to the end of the pedestrian road, you can go by bicycle. The road goes much faster (another 1 hour). This time, in order to find the lava, it took another 2 hours of jumping over the frozen lava!

The closer to the lava, the hotter it became under the soles, and the upper layer was more fragile. Near the lava is very hot. This heat is fascinating. You can watch for a long time how it flows from one place to another. It is curious that Big Island consists of two parts. They are completely different from each other. Kilauea Volcano sends gunpowder and hot wind to the southern and western parts of the island – the coast where the city of Kona is located. The so-called Kona Coast.

Therefore, there is a scorched soil and a dry climate. On the rich volcanic soil ocean creatures feed. Going a little south of Kona, you find yourself in the famous bay of Captain Cook Bay where many goldfish live. On the other side of the volcano where the town of Hilo (Hamakua Coast) is located, the island has a completely different appearance. The greens are rampant here, and the moisture feeds everything around. Here the most outlandish plants grow and it rains very often. That is why there are many waterfalls.

The highest and most famous is Akaka Falls, it plunges into a rocky gorge about 30 minutes from Hilo. If you go north from Hilo – the landscape becomes mountainous. About an hour later, you will get the view over the valley Waipio. These are three picturesque slopes that can be overcome on foot for three days in the wild Hawaiian jungle. There is no drive through the valley but you can walk down to the beach and back. Waipio valley can also be observed from two sides. From Kona, you can go on the west coast to the city of Hawi that is located in the very north of the Big Island (just over an hour by car). This is a nice little town. Here the influence of the wet jungle and the cooling of the volcano are already felt since its heat blows only to the south and west of the island.

From Havi, drive a little more to Pololu Valley – the reverse side of Waipio. On the road from Kona to the north, you can not miss the beaches. They are many, but it is worth to show at least 2-3. For example, I remember the little Kukio beach. (on the photo) As well as excellent surfing on the extensive beach is Kaelehuluhulu. Next to this one, there is a bay of Mahaiula, where we swam with a huge turtle!

From this bay, you can walk on the burning sand to another beach – Makalawena. Since it is difficult to access, there are no people at all. (on the photo below) There is another one: the most popular beach where there is always a lot of people – Hapuna Beach.

Many are lazy to go to Cook Bay because it seems like a 40-minute drive to one side of the main road. It is hot and there is no place to sit. In fact, it is not exactly like that. And this is one of the best places where I dived!

Many swim in boats and stop far from the shore where there is a small cave. But there is a lot of living creatures everywhere in the bay. You can dive several times a day. It is so exciting! 2 Steps Beach is also a good place to dive although there is often a strong current here. You should better come here around 6-7 am when dolphins swim up close to the shore, and you can swim with them.

Another interesting place in the very south of the Big Island is Green Sand Beach. Quite a weird journey, however. The way is not long – 1.5 hours from Kona to South Point. Then about another 1.5-2 hours on foot in one direction along the coast in search of this magical place with emerald sand. It is a hike under the scorching sun among the greenish-yellow dunes. You can shorten the path and ride a quad. In the end, this is a small romantic beach but the sand is not green at all! Well, it is an interesting experience, anyway. At the end of the journey, we were so hot and tired that swimming at Green Sand beach was more than welcome. There are still a lot of beautiful and not so famous places on the Big Island. The main thing is that here you can combine everything in the world – and hiking in the mountains, and diving, and a relaxing beach holiday, and life in the jungle!