The most beautiful waterfalls of Iceland 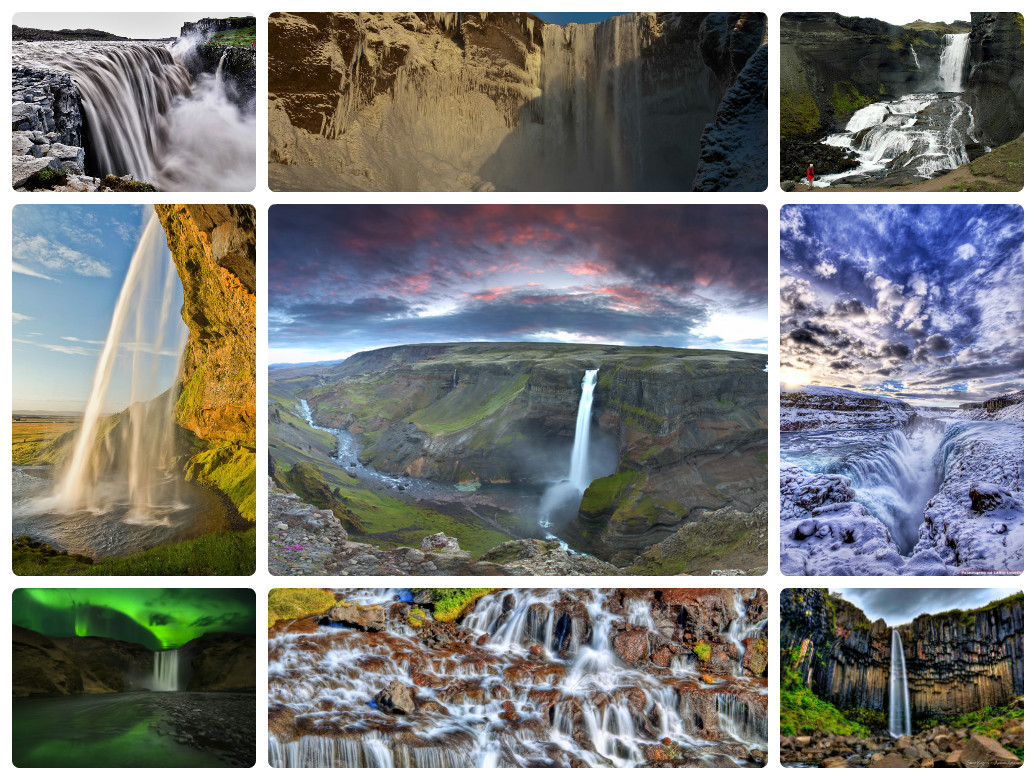 I love waterfalls – a long time ago I had a dream to see more waterfalls in the whole world and literally to touch them. The preference was given to the most important waterfalls in height and depth. But I also like small waterfalls. In fact, sometimes they are located in beautiful places!

From the great waterfalls, I was lucky to see the Iguazu Falls and Niagara. In the Iguazú I could still swim. I have plan to go to Angel Falls (Venezuela), Victoria (Zambia) and also see several waterfalls in Canada and New Zealand.

In this article, I will tell only about the waterfalls in Iceland. Therefore, at the bottom of the map, there are some more prominent ones. It is clear that the country is dotted with waterfalls – there is a lot of water! It is one of the largest waterfalls in Iceland. The name is translated as “the highest waterfall”. This one and its neighbor Granny are in the Fossa river basin in the south. In this valley, there are beautiful landscapes at the intersection of the Fossa and Þjórsá rivers.

According to the legend, in the Fossarfoss waterfall (as it was called until 1912) there lived an ogre that once came to eat at the camp where some young travelers stayed. He tried to steal the youngest of them while the companions dragged him back to the store. After this incident, the child could not recover for a long time, and people began to be afraid of this place.

This waterfall is very unusual although small in size. They can be seen from all sides, the flow of water quickly falls along the cracks of the rock. You can enter the cave and see the waterfall from behind. Under the cliff breaks of this natural wonder, there are several trails that allow you to see it from all sides. You can also climb the cliff on a narrow path and get wet at the mouth of the waterfall.

The place is a 2.5-hour drive from Reykjavik.

This waterfall is located in the southern part of the island. This one is as splendid as the famous Gullfoss. If you climb the stairs to the top of the waterfall – from there the path leads to the crack between the glaciers Eyjafjallajökull and Mýrdalsjökull.

According to one of the legends that can be found in all places in Iceland, the first Viking lived there. Before dying, he buried the treasure behind the waterfall. For a long time people tried to find him, and when the time came, they found a gold chest. However, only the ring was collected so the treasure disappeared immediately. The ring went to the local church, and the rest of the gold has not yet been found.

This waterfall is not well known among travelers. It is located in the south of the island and flows into the Eldgjá creek with a depth of 200 m. It is a beautiful waterfall. The real height of the main part is about 20 meters. But we always keep in mind the depth of the throat because the waterfall flows down the stairs.

The creek was formed in the year 934 during the time of the first settlements. Now, at the foot of the upper part of the waterfall, a rock arch has been formed that complements its panoramic views.

Gullfoss or cascade of gold – a business card of the country and the only one of the waterfalls that I saw in Iceland. It is near Reykjavik (around 2 hours away) in the region of hot geysers. I was there in winter when everything was covered with snow and only a few geysers exploded and evaporated.

When the path of geysers was completed, the impressive cascade of several tributaries rushed to the crack between the rocks. Although it is not high, it carries enormous amounts of water that never freezes.

10 birds that live in Iguazu Falls